Posted at 17:17h in Uncategorized by ismeo

During geoarchaeological investigations in the Lopburi Plain several small sites were identified near Khao Sai On (KSO) (74 m asl; 14°50’10” N, 100°37′ E), a limestone inselbergwith small copper ore outcrops, industrially insignificant but mined in antiquity – as indicated by the presence of a sizeable open-cast mine on the eastern hillside [Fig. 1]. Of the sites located less than c.2 km from KSO, two seemed of particular interest. The first, known locally as Khok Din (‘Earth Mound’), covering just 500 m2 at c.90 m from the hill, showed evidence of pre-protohistoric metallurgical activity (such as roughened bedrock, reduction of copper ore and casting of small tools in terracotta moulds), very similar to those highlighted by the Thai-American “Thailand Archaeometallurgy Project” in the large industrial and residential site of Nil Kham Haeng, located in the valley of the Khao Wong Prachan massif, about 16 km north of KSO. At the second site, known as Noen Din (‘Flattened earth’) no archaeological evidence was visible on the surface, but reports of the discovery of a small copper/bronze container and tools, potsherds and human skeletal remains were enough to make us suspect the presence of a graveyard.

In 2006 we started investigations at KSO with two trial trenches in the Khok Din and Noen Din localities, which were followed by more extensive excavation in 2007 and 2008 [Fig. 2].

In the mound of metallurgical remains, stratigraphic excavation revealed a deposit formed by activity surfaces for processing the bedrock and reducing the copper ore [Fig. 3], and overlapping “lenses” of ground ore (especially quartz and diorite with residues of copper oxides and sulphates) [Fig. 4] and slag fragments mixed with artefacts used for crushing the bedrock (stone hammers and anvils) and for reducing the minerals (crucibles and terracotta furnace  “collars”), associated with fragments of domestic pottery.

This deposit, formed by repeated processing cycles, accumulated directly above the limestone bedrock, in contact with an outcrop of lateritic soil. The best evidence of metallurgical installations came only from the lowest level. These consisted of at least two clay structures, unfortunately completely demolished, associated with fragments of wood charcoal and large patches of ash. Based on the type of household potsherds and industrial ceramic fragments found, the mound must have formed within the last quarter of the 1stmillennium BC. [Fig. 5].

At Noen Din (c.1.5 km NE of KSO), between a large tract of cultivated land and a remnant of tropical forest crossed by a seasonal drainage ditch, in 2006-2008 an area of 156.25 m2 was excavated, bringing to light a single archaeological layer made up of residential debris and industrial waste derived from the reduction/ melting of copper ores. Dumping episodes were characterized by pieces of domestic and industrial ceramics (crucible, kiln and mould fragments) and mammal bones in a silty-clay matrix mixed with minute fragments of smelting slag and metalliferous rocks [Fig. 6]. The residential nature of the deposit, which covers approximately 2 ha, is also due to the presence of some postholes associated with standing structures of uncertain plan [Fig. 7], and two child burials. In other prehistoric Thai sites burials of this type are usually located outside the adult cemetery, of which only four burials were excavated in Noen Din (G1-4). Unfortunately the cemetery continued in the southern portion of the site, on land where we were not allowed to work for fear that the spirits of the dead disturbed by our excavations might take revenge on the old woman who owned the plot (always accompanied by two unsociable Rottweilers).  One of the two isolated burials (G5) was of a pre-pubertal individual buried on a “bed of sherds” (pertaining to two vases crushed on the spot before laying) and accompanied by a jar placed near the feet [Fig. 8]; the second (G6) contained the remains of a newborn with a carnelian bead necklace, a shell anklet with “barrel” pendants, three vases and nine terracotta casting moulds [Fig. 9]. Both the vessels and the moulds exhibited breaks and repairs predating their deposition in the tomb; the moulds were of different shapes and none could have been used in pairs. Although both vases and moulds could be seen as “waste objects”,  this infant’s burial was exceptional in that it was accompanied by “tools of the trade” (such as the moulds), clearly generally reserved for adult graves, but in fact only present in those recognized as “founders’ burials”. This ritual therefore suggests that these grave goods were not intended to reflect the activities practised in life – since the occupant was a newborn – but as in preparation for an afterlife where the dead infant might have pursued an activity perhaps linked to a family tradition or specialization. 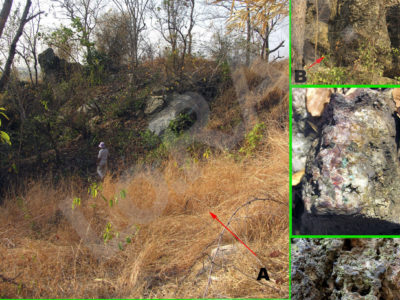 Fig. 1. A. View of the large hollow in the side of the Khao Sai On (KSO)  inselberg, probable evidence of an open-cast mine; B. Weathered copper minerals seen in the same area. 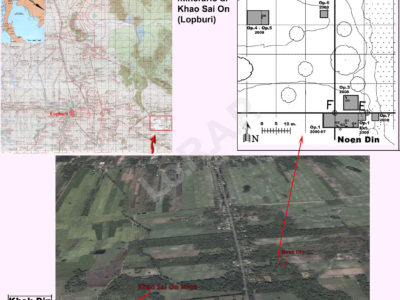 Fig. 2. The archaeological and mining area of Khao Sai On, showing the location of the two sites (Khok Din and Noen Din) investigated by LoRAP. 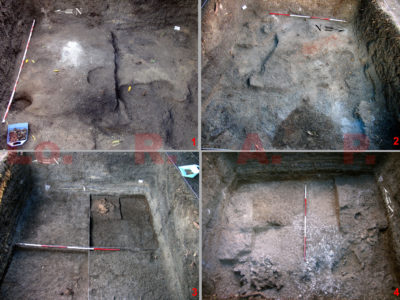 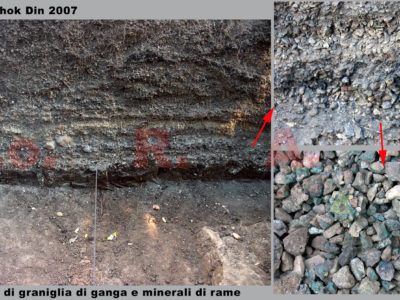 Fig. 4. KSO-Khok Din, Square A, evidence of ore enrichment activity at the mines, consisting of a series of gangue-grit lenses and residues of impure copper oxides and sulphides. 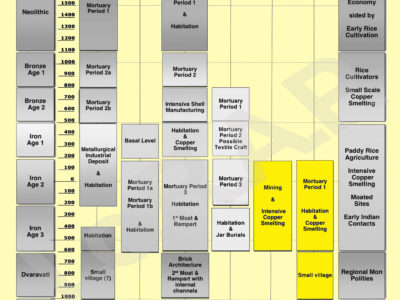 Fig. 5 Chronological and cultural sequences of the Khok Din and Noen Din sites. 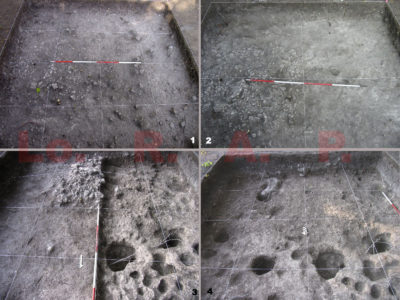 Fig. 6. KSO-Noen Din Operation 2, excavation sequence of the northwest margin of the layer of domestic/industrial dumping. 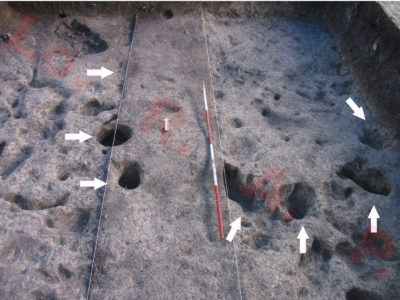 An undoubted “founder’s burial” is that of the adult (G4) accompanied, in addition to a pottery vase, by two carnelian beads and one of glass, and a “collar” (or “pierced collar” or “perforated cylinder”) of terracotta, component of a copper-smelting furnace [Fig. 10], of which only other complete specimen was found in a tomb excavated by the Thai-American “Thailand Archaeometallurgy Project” on the site of Nil Kham Haeng. These “pierced collars” represent an original technological innovation, not documented in other metallurgical sites in continental Southeast Asia, introduced into the copper-smelting process by the Plain of Lopburi metalworkers during the Iron Age. Although numerous experimental verifications are still necessary, the association of fragments of “collar”, crucible, and slag-covered terracotta – which probably covered the “cup furnaces” – suggests that the co-smelting of copper oxides and sulphates was practised [Fig. 11-15].

Our preliminary hypothesis is that the crucible containing copper ore and fuel (probably charcoal) was placed in a clay-lined pit surmounted by a “perforated collar”, which had the function of facilitating control of the temperature in the smelting chamber [Fig. 16].

The metallurgical activity documented at KD/ND -dating from circa 1stcentury BC to 4th/5thcentury AD [Fig. 5]- and in many other sites (some excavated, others not) in the Khao Sai On area, e.g. in the Khao Wong Prachan Valley and other Lopburi Plain localities, belong to a millennium (5thcentury BC – 5thcentury AD) which saw important transformations in the local social structure, with the emergence of classes possessing greater wealth and more status symbols, including copper/bronze jewellery and tools/weapons of iron. The increase in local demand for these goods – and according to some scholars, the long-distance trading of copper (e.g. to the Indian subcontinent) – would have driven the intense exploitation of local copper ore deposits by small groups of “peasant-founders”. 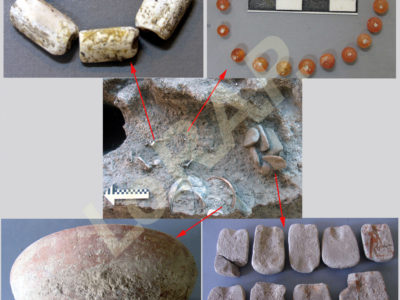 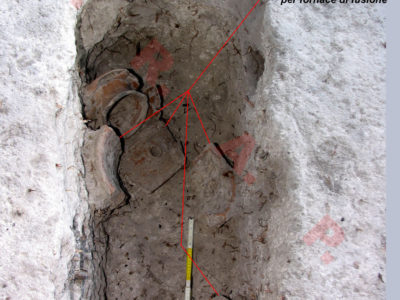 Fig. 10. KSO-Noen Din Operation 1: adult burial (G4) (c.2ndcentury BC- 2ndcentury AD) accompanied by a pottery vase and a terracotta ‘perforated collar’ for a smelting kiln, broken into five parts found above the skeleton (not yet uncovered). 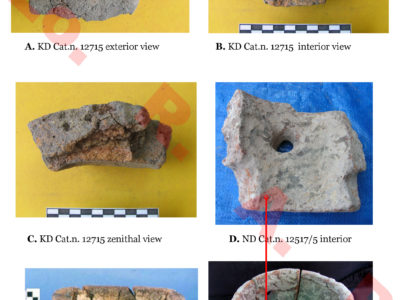 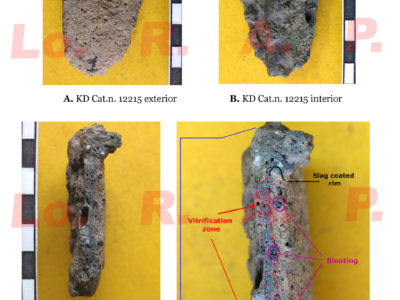 Fig. 12. Khok Din: fragment of a Type 1 terracotta crucible, probably used for the reduction of copper ore. Note the area of vitrification on the inside (due to intense heat), between the pottery fabric of the crucible and the layer of slag adhering internally. 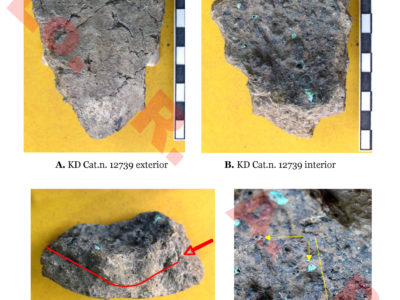 Fig. 13. Khok Din: fragment of a Type 2 terracotta crucible. Note the slot in the rim, perhaps made to hold an aeration tube (tuyere) or to facilitate pouring the molten metal. 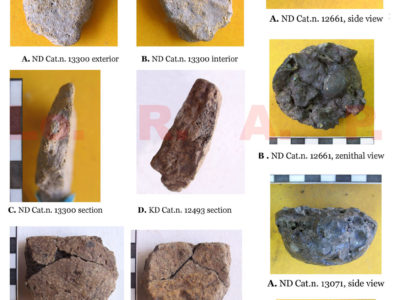 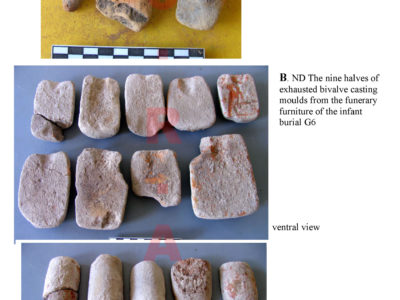 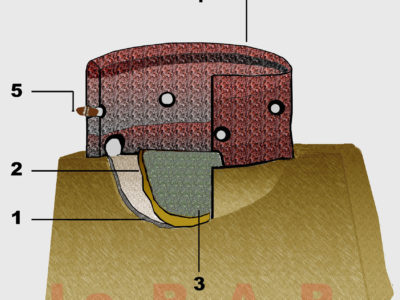