Posted at 17:16h in Uncategorized by ismeo

The site of Phu Noi (Ban Mi District, Province of Lopburi; 15°14’20″N, 100°35’02″E) is located in the ‘Takli hill belt’ at the northwestern edge of the Lopburi Plain (about 48 km from Tha Kae) [Fig. 1]. In 1990 digging for the foundations of a Sala Thai-type masonry pavilion at the old wooden Buddhist temple in the village brought to light several human skeletons and pottery vases; this chance discovery was followed by a rescue excavation conducted by Surapol Natapintu, then director of the ‘Central Thailand Archaeology Project’ (Archaeology Division-Thai FAD). The excavation brought to light 32 graves – divided into three cemetery phases – accompanied by pottery vases and shell, tortoiseshell, ivory and stone jewellery. The graveyard was dated – on the basis of the absence of metal in the layers and an initial evaluation of pottery types – to around 2000-1500 BC. Stratigraphic excavation of the site was then taken up by the Italian-Thai project, revealing that the archaeological deposit – varying from 25 to 250 cm in thickness over an area of about 5 ha [Fig. 2] – consisted of a lower layer, cut by three phases of an extensive burial ground, and an upper layer featuring mainly the remains of inhabited areas [Fig. 3].

As often happens in Southeast Asia, the extent of co- and post-depositional bioturbation made it impossible to obtain reliable carbon samples for radiometric dating. However, the discovery of bronze artefacts with a high tin content, together with pottery types and the diagnostic burial ritual (with the offering of portions of animal carcass near or on the pelvis or near the skull) allowed us to establish, thanks to comparisons with similar finds in sites with 14C dating, that the three burial phases (recognized on the basis of the stratigraphic sequence of more than 50 burial cuts) could be assigned to a period between the end of the Bronze Age (600 -500 BC) [Figs. 4,5] and the middle Iron Age (200 BC – AD 200) [Fig. 6]. 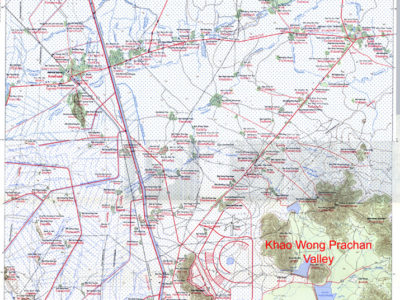 Fig. 1 Province of Lopburi (upper left) with map showing our research transect and position of the Phu Noi site. 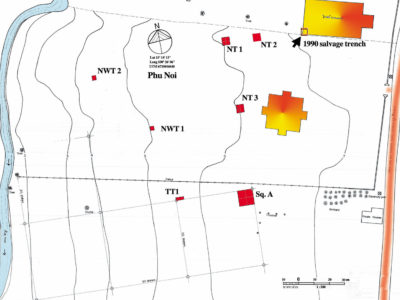 Fig. 2 Plan of the Phu Noi site showing positions of the excavation areas. 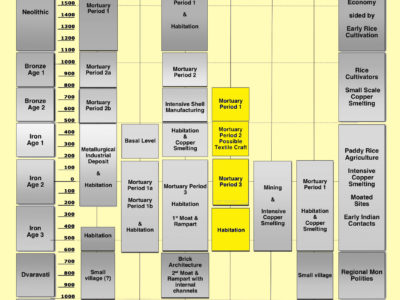 Fig. 3 Chronological and cultural sequence of the Phu Noi site. 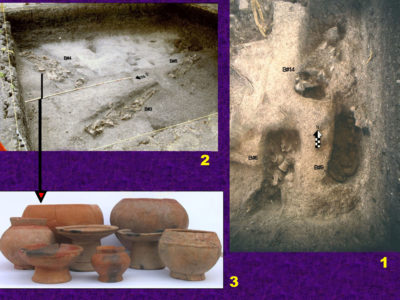 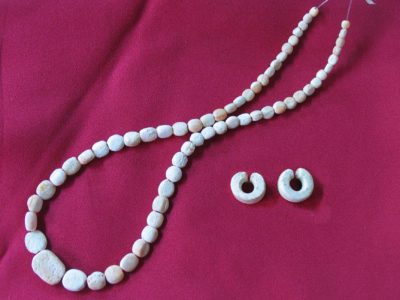 Fig. 5 Tridacnaclam shell jewellery of Late Bronze Age date: 65-bead necklace from the grave goods of Tomb 13 in NT3 and pair of earrings from Tomb 6 in NT2. 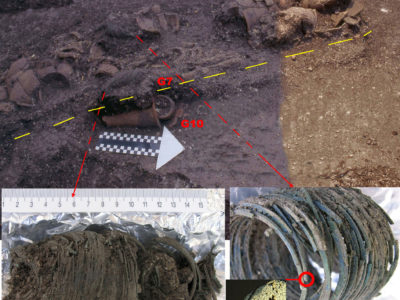 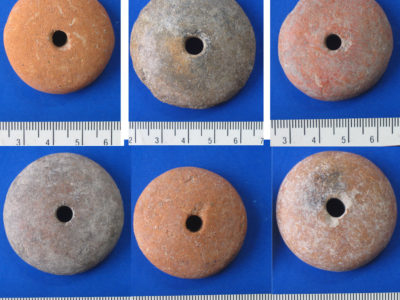 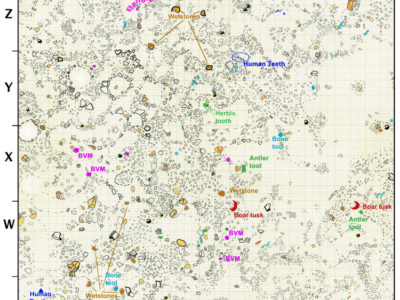 Fig. 8 Plan showing the random distribution of fragments of Late Iron Age artefacts (AD c.200-400/500) and the regularity of potsherd clusters related to the latest burials of the underlying cemetery level.

An important discovery for our comprehension of the socio-economic growth process of this small, peripheral community in central Thailand during the period in question was that of terracotta spindle whorls – which were present, in varying numbers, in almost all the ‘female burials’ [Fig. 7]. These simple devices testify to the development of spinning-weaving activities in the context of craft production that was probably family-run.

The upper occupation deposit at Phu Noi [Fig. 8] contained the remains of a distinctive bone/horn-working industry, sandstone smoothers probably connected to this, and fragments of terracotta “shell” moulds for the casting of small, thin copper/bronze instruments typical of the Iron Age metallurgical production of the province of Lopburi. This layer contains imitations of Indian artefacts, such as the abraders and terracotta jewellery, and dates to the late Iron Age (AD 200-400/500). The presence of imported or imitation Indian artefacts among the remains of a small, peripheral rural community (probably mediated by settlements on the plain, e.g. moated sites such as Tha Kae and Lopburi), is important because it shows how widespread objects and behavioural patterns originating in the Indian subcontinent – such as the ritual practices of personal hygiene highlighted by the use of files – were.