Italian archaeological activities in Swat (Khyber-Pakhtunkhwa province) began in 1955, when Giuseppe Tucci, a famous Tibetologist and Orientalist, visited the region for the first time. Thus began work that was to continue uninterruptedly for 60 years, with the Italian archaeological mission of IsMEO, the institute chaired by Tucci (later IsIAO, now ISMEO), taking a leading role in the archaeology of the Indo-Pakistani subcontinent. 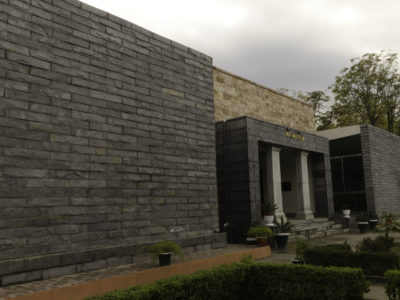 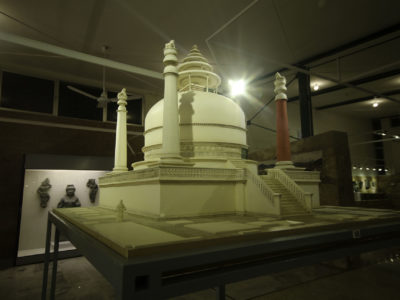 1:20 scale model of the stupa of Saidu Sharif I (model by F. Martore). 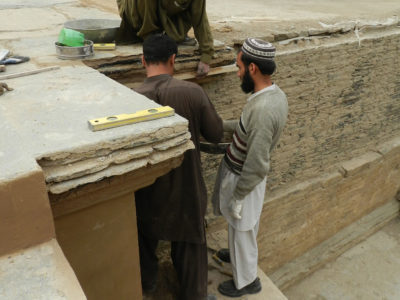 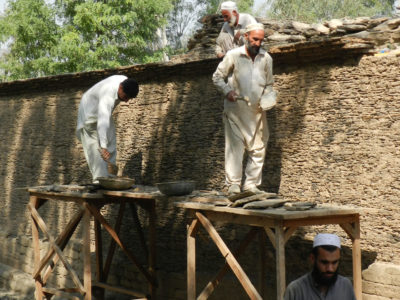 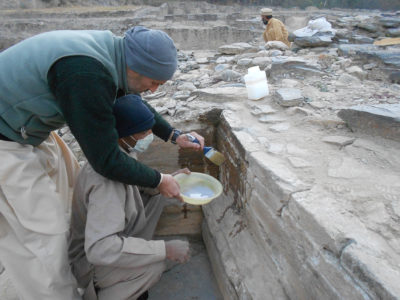 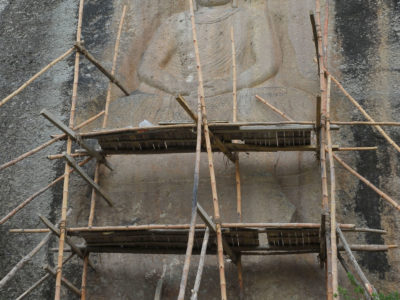 The Jahanabad Buddha at the beginning of conservation treatment. 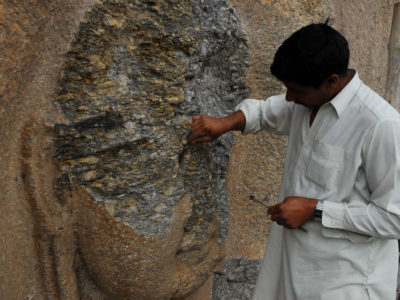 Conservation work in course on the Jahanabad Buddha. 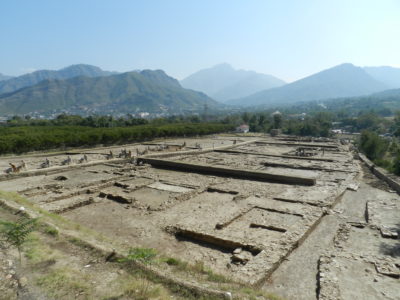 It was important to resolve the legal technicalities regarding archaeological excavations. The law in Pakistan at that time dated from the colonial era, the Ancient Monument Protection Act of 1904. But Swat was then an autonomous state, which depended on Pakistan only for its foreign policy, currency and postal service. In 1956 Tucci obtained an excavation licence from the Department of Archaeology and Museums, which had inherited the functions of the Archaeological Survey. From an Italian perspective every excavation needs a legal basis, which determines the ownership of the objects found, and that this ownership determines – except for explicit exceptions – the place where these finds are deposited, i.e. the state museum. In 1958, as witnessed by archive documents, Tucci gained the Swat ruler’s acceptance that the Pakistani archaeology law should be extended to Swat. In 1958 the first Swat Museum – the first Pakistani public building in Swat – was opened in Saidu Sharif. The excavations, which had begun in 1956, almost immediately acquired a legal basis consistent with an Italian viewpoint. In practice, the mission was defined as no less than the “entity for the promotion of tourism and cultural heritage” within the State of Swat: Tucci asked the Rome CAI (Club Alpino Italiano) for help organizing hiking and mountaineering expeditions, training courses in woodworking (which is traditional in Swat) were assisted by South Tyrolean craftsmen, and the first experimental grafting of domesticated olive trees onto wild Swat wild olive trees was conducted. In the field of archaeology the mission rapidly obtained important results with the great excavations of Domenico Faccenna in the Buddhist sanctuaries of Butkara I, Panr I and Saidu Sharif I. Other significant excavations were soon added: those of proto-historic burial grounds, historical era settlements and Islamic monuments, with the participation of Giorgio Gullini, Giorgio Stacul, Massimo Taddei and Umberto Scerrato (among others). Activities continued uninterruptedly – through times of great changes, in first place the annexation of Swat to Pakistan in 1969 – until 2007. 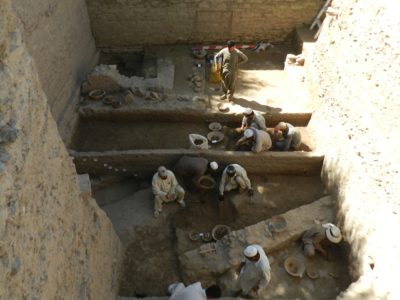 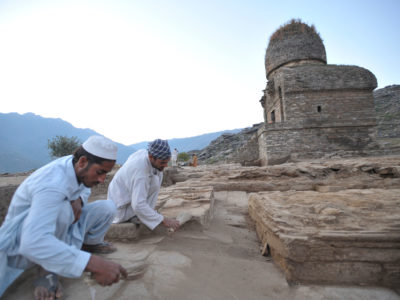 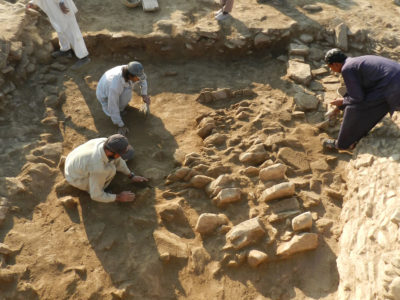 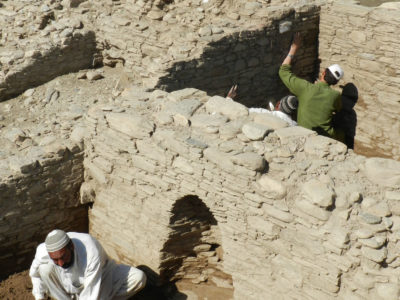 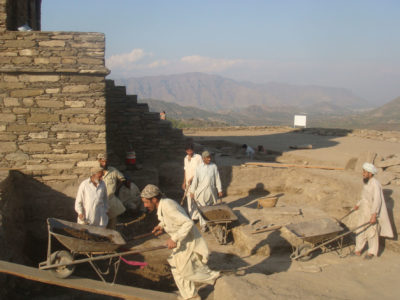 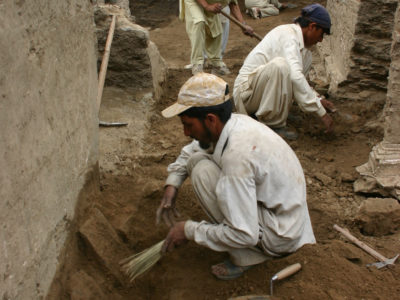 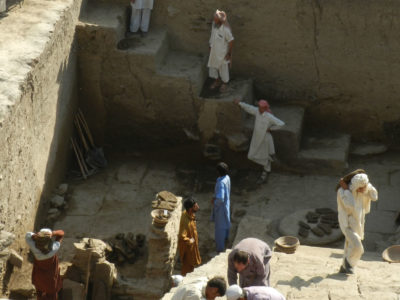 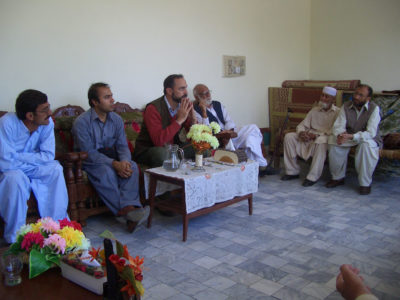 After a necessary pause – between 2007 and 2010, when a Taliban emirate was established in Swat, MAIP suspended fieldwork – work resumed in 2011 thanks to the Italy-Pakistan “debt-swap“ programme (PIDSA) funding of a joint Italian-Pakistani project called “Archaeology, Community, Tourism – Field School” (ACT), headed by the mission. The project is currently in its final phase. The total Italian funding has so far amounted to about  €2.4 million, mostly used for civil construction and the employment/training of local personnel (over 300 workers/trainees), largely people who were displaced internally during military operations in 2009 (2 million refugees from Swat). The personnel were employed and trained in eight excavation and conservation sites (Udegram mosque, urban site in Barikot, sacred Buddhist areas of Saidu Sharif I, Amluk-dara and Gumbat, Jahanabad rock sculpture, Udegram and Gogdara 4 proto-historic graveyards) for over 1000 workdays, as well as training activities related to tourism. Five years after the start of the project, the sites under the responsibility of ISMEO/ACT are visited by over 30,000 tourists per year (mostly national). These sites – some of which have been maintained by the mission for about 30 years – are now being acquired by the Archaeology and Museums Directorate of the Government of Khyber-Pakhunkhwa, with an economic investment of circa €3 million.

The heart of the entire project is the new Swat Museum, designed by architects Ivano Marati and Candida Vassallo, in collaboration with engineer Claudio Cristilli (Aires-University of Naples Federico II) and engineers from the Peshawar University of Engineering and Technology. The previous museum, built with an Italian contribution in 1956-1963, was judged to risk partial collapse by an independent structural study (it had been damaged by an explosion in February 2008). Part of the building was demolished and part of it was restructured and incorporated into the new building. The new museum is designed according to new anti-seismic standards, which makes it –structurally speaking – the most advanced building of its kind in Pakistan. When the original Swat Museum was inaugurated by Giuseppe Tucci on 10thNovember 1963 a message from the Italian President Antonio Segni was read out. Almost exactly 50 years later, on 11thNovember 2013, the new museum was inaugurated, and a message from President Napolitano was read out at the ceremony. 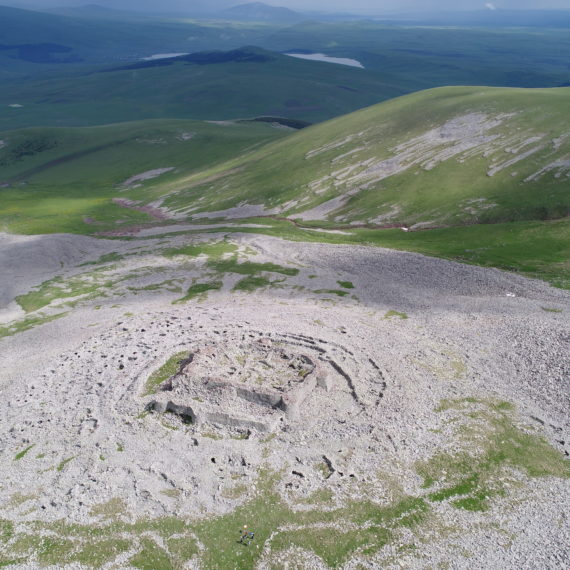 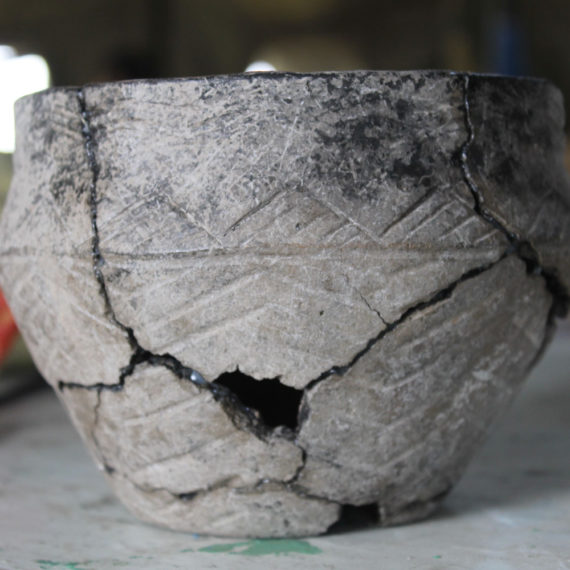 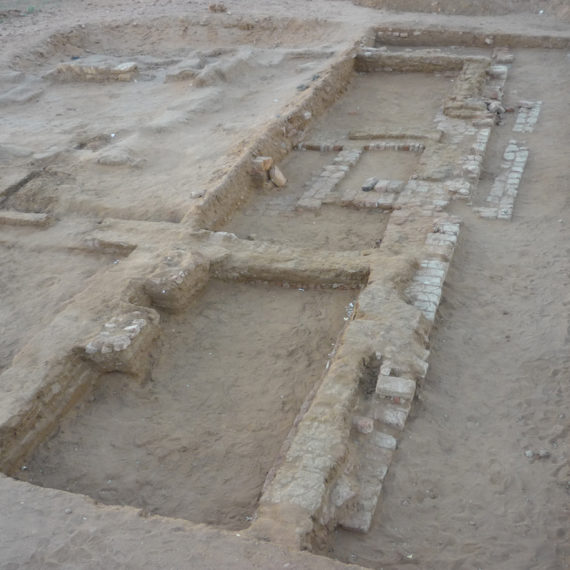