Posted at 23:34h in Publications by ismeo 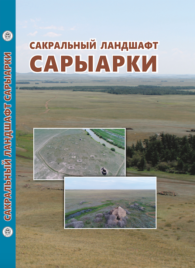 The Sacred Landscape of Saryarka

The book “The sacred landscape of Saryarka in the archaeological context: genesis, typology, semantics”, published in spring 2021 in Nur-sultan, capital of the Republic of Kazakhstan, is a compilation of contributions by several authors: 218 pages of text, colour photos and black and white drawings. The volume is comprised of an introduction, nine chapters and a final conclusion chapter, which describe the archaeological, historical and ethnographic research conducted by the Italian Archaeological Mission in Kazakhstan from 2018 to 2020 in close scientific and technical collaboration with the Akishev Institute of Archeology and Gumilev Eurasian University. Both institutions are located in Nur-sultan.

The northern Saryarka region, a large territory surrounding the capital of Kazakhstan, was the primary subject of the research. The project confirmed that this region, with its unique characteristics, has acted as a sacred landscape over the course of several millennia: it has been made sacred by architectural constructions, modifications of the territory and by socio-political alliances made by the most ancient and medieval ethnic groups. This vast territory is dotted with sacred sites, vestiges of its diverse peoples and historical periods: places of worship and prayer, necropolises, pastures guarded by farmers and springs protected from enemies and foreigners, tombs and mausoleums set atop hills to mark and defend the territory and its resources, shelters for pilgrims as well as animals, petroglyphs on rocks, roads, bridges. These sites had a residential, economic or commercial and socio-political purpose, yet also served as places of worship and for ritual practices. The sacred landscape is a geographical and cultural space transformed by sacred rituals over generations.

Saryarka is an amalgam of different landscapes: grasslands and pasture ecosystems, areas of arid or pre-desert steppe, plateaus with low and flat reliefs and plains along the valleys of rivers such as Ishim, Nura, Silety, Zhabay and Karasu. The varied landscape has brought about the original and heterogeneous cultural and historical processes that have taken place over millennia, the direction of cultural ties and the appearance of numerous and different social and cultural traditions.

The thematic diversity of the monograph’s nine chapters reflects the important results of the work carried out. The volume can be divided into three sections: the analysis of the theoretical concept of “sacred landscape”, field investigations of the most significant sacred areas identified in the three years of research and a description of exploration routes along the Saryarka steppe. The second section of the monograph also includes the results of the archaeological excavations carried out in the last three years: the excavation of the royal mound at Kuygenzhar cemetery, on the southern edge of Nur-sultan, the seasonal settlement occupied by contemporary Kazakhs (19thcentury) of Sarkyram and the excavation of the medieval cemetery of Kishi Mailan.

Explorations carried out in the environs of Tengiz-Korgalzhyn lakes and along the lower course of the Nura River have highlighted the wealth of monuments found in this region. They majority are large settlements, occupied between the late 19thand the early 20thcentury by Kazakh breeders, sited along the shores of small freshwater lakes. The settlements are surrounded by burial grounds, stone mazars and earthen mausoleums, as well as simple pits dug in the ground and covered by a low heap of earth.

Saryarka is home to numerous funerary and memorial complexes dating from the 16thto the early 20thcenturies: this evidence supports the sacred character of the region. Saryarka was one of the main territories where the ethnogenesis of the Kazakh people took place and where the first Kazakh state expression was born.